The standard guns given to women are awful for many female shooters, which is a significant issue with such “guns for women.” Why? Mostly, this is because subcompact and micro guns often employ a smaller round.

Pocket .380s, snub nose revolvers, and so on will suit tiny hands better, but they aren’t the simplest to fire or shoot correctly. But it doesn’t mean women can’t learn to shoot well, and seasoned female shooters can’t handle these guns better than many guys. More than shooters of both sexes have reported issues with these guns.

It doesn’t matter who you are as a shooter; you should carry and shoot whichever gun you feel most comfortable with. Now, the question is, what are some of the best guns for women or shooters with smaller hands that are also simple to shoot well?

Many people who have experience with handguns will tell you that at some point in your life, you must buy a Glock. In Austria as a curtain rod producer, Glock entered the American market in 1988. At the time, law enforcement and military personnel felt helpless in front of criminals and drug dealers.

Consequently, the name “Glock” entered the mainstream of American pistol owners and the film industry. At a time, owning a Glock meant you had “street cred” and, more significantly, street power.

These early versions were well constructed, quiet, and, most importantly, durable. The fourth generation of the Glock 19 is an excellent addition to the company’s already impressive portfolio of handguns. Police and military still favor the new lightweight polymer variants, but they also make great guns for women.

Glock took customer feedback on the previous generation and used it to improve the Glock 19 Gen 4. The new model is far superior since it incorporates many user ideas.

There’s no better place to see the Glock in action than at the range. Compared to earlier versions, its recoil does not feel much different subjectively. However, the ergonomics—the way the gun’s weight distributes and its shape—make for a different shooting experience. Its accuracy has benefited from the improvements made to its usability and general feel.

On the gun range, the Glock demonstrates precision that might be matched by other models but never surpassed. This gun is perfect for women because of its small size, lightweight, and concealability.

On this list of the great guns for women, this one is at the second. It’s easy for women shooters to keep this weapon out of sight in their purses. Women who want a small, light, dependable gun with stopping capability find this weapon just what they’re looking for. Its high value in the modern market because it meets the needs of a wide range of shooters.

The ease of usage of this gun will become immediately apparent when the first shot is fired. This gun is still an option if you’re a woman with less shooting experience or shaky hands. In other words, you can’t take additional safety precautions like pressing the trigger.

Its quality makes it useful in a variety of contexts. This gun is chambered in both the powerful defense around.357 Magnum and the manageable.38 Special. It manufactures premium components that are suitable for permanent installation. The targets of this gun are simple to aim at, even though the gun works at close range. It is an ideal conceal-carry gun for a lady with smaller hands.

It is the perfect gun for ladies nervous about hitting their target in their first five rounds. This little women’s handgun is popular among conceal carry.

Springfield Armory created the Hellcat line to provide the best compact available at an economical price. They achieved success by combining new ideas with customer input. Thus, it stands to reason that they would include the great guns for women in our list.

Springfield guns are well known for their superior craftsmanship and innovative design. Therefore, the next step was to enhance even that by cutting-edge technological innovation.

First, Springfield has given us a choice between a 13-round extended mag and an 11-round flush fit mag. The model’s expanded mag makes it possible to fire 13 9mm rounds from such a compact pistol, a significant technological advancement. This gun has an excellent grip that should be comfortable for most gun owners.

The next component is the detachable sights, and there are two alternatives with a price difference of around $30. One is the HC9319B, equipped with plain old steel sights, while the other is the HC9319BOSP, an “OSP” pistol with optical sights.

The precise feel of the trigger is due to its flat surface. The National Tactical Officers Association gave the Springfield Hellcat the top rating after a series of tests.

The origins of the SIG Sauer P238 may trace back to the classic Colt 45 design. After Colt halted manufacture in 1986, Sauer acquired the rights. And the updated model was then made available to the public.

Since its release, the SIG Sauer P238 has received widespread praise and commercial success. It has also been widely loved for being an excellent choice of gun for women. With its sleek, futuristic design, this gun demands more attention than we can give it now.

There is little complexity involved in maintenance. It can be disassembled and cleaned in a matter of minutes, with the added step of using bottled air to blast out the lint from the hammer area. And you should be all set. What’s more, this model has received nothing but five-star reviews for its durability, giving you everything you could desire in a self-defense gun.

Some people aren’t comfortable with “cocked and locked” carry, but this SIG loads with protection options. Fears may be put to rest by disabling the draw’s manual safeguard. Get some drawing practice in, and you’ll be able to put an end to an attacker fast and efficiently. Unless you activate it, the SIG will not fire.

Most guns tend to be a little too harsh on the wrist. The SIG’s recoil is so tiny that you’ll be right back where you started in no time.

First-time female gun owners tend to see this gun as a fearsome instrument of death. However, the whole force is because of the stability of its base. This gun, which has a polymer frame, is very sturdy.

This gun’s ability to remain unruffled while delivering exceptional performance stands it apart from the competition. All female shooters will find the design and size to be quite accommodating.

PX4’s bore axis is relatively short, making it easier to hit the target while aiming. There are significant issues for those who utilize standard barrels. Those aren’t as reliable as a “fixed barrel,” guaranteed by the barrel’s innovative locking construction.

This concealed carry women’s gun has a trigger similar to Double Action guns. The usage of this weapon is simple, although some care must be taken, particularly by inexperienced shooters, under certain circumstances.

For women who value precision shooting, this is the best available gun. Its excellent looks pair with low recoil, making it ideal for women.

We should emphasize it once again. All the firearms we analyze here have high manufacturing standards and are backed by years of expertise.

All of the guns are equally trustworthy and accurate, so they aren’t considerations you should have to make when selecting one for self-defense. Spending ten times as much on the latest trend won’t get you any farther than what you need.

We chose the Springfield Armory Hellcat 3″ Micro-Compact 9mm above the Glock G19, the Sig Sauer P238, and others as our top picks.

Partly because of its industry recognition. Other positives are:

In every other respect, it meets or surpasses the benchmarks we’ve set for the shooting industry. 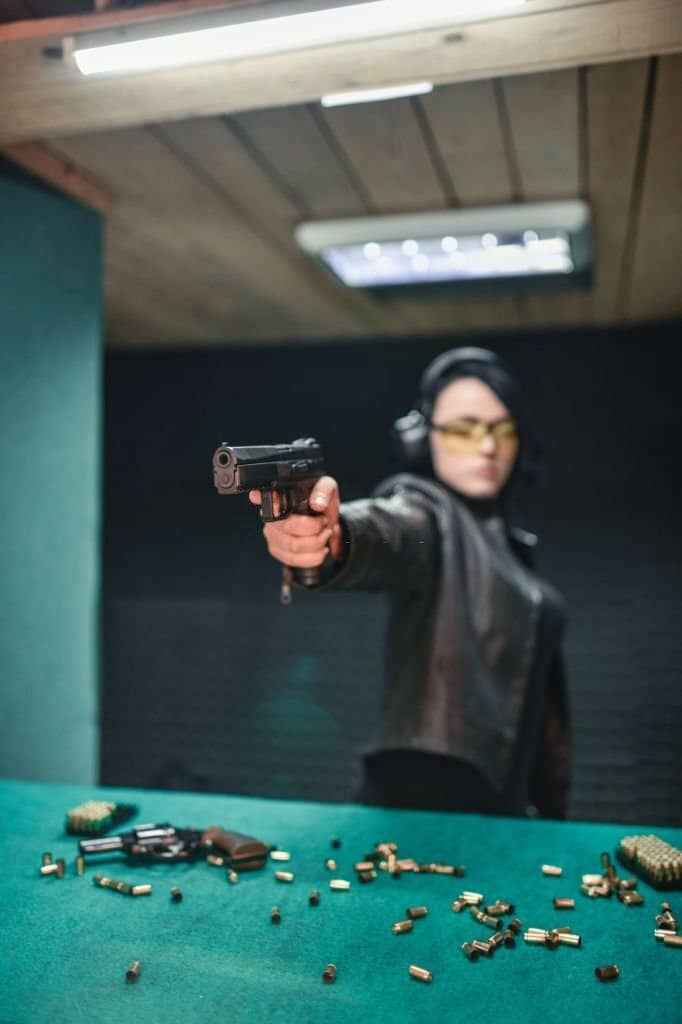